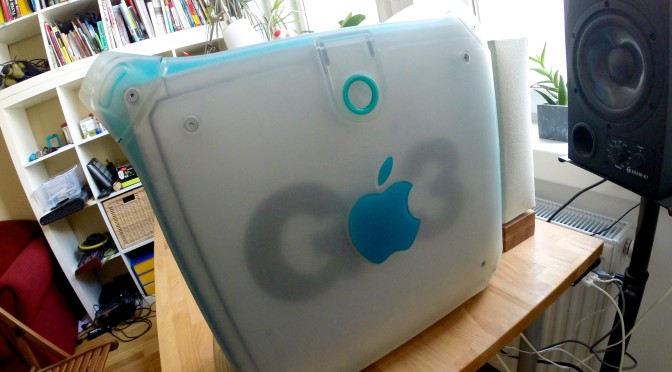 After 6 1/2 years I decided to replace my good old early 2008-20″ iMac. But instead of buying a new one or switching over to a classic PC-workstation, I decided to build my own custom PowerMac G3 Blue&White Hackintosh with next level monster-hardware.

How I’m using this Machine

I’m using this machine for programming purposes and data-analysis, but also for editing my amateur photos/videos. Next to that I like to have a classic workspace for office-related stuff instead of always using a laptop.

Who should use a Hackintosh and who not

Not for:
You should not think of building your own Hackintosh if you depend on your computer. Too many times the computer won’t boot up or shows other weird symptoms that you’re not used of a well-working Apple-computer. My laptop is still my main-computer that I’m using for paying my bills, answer my mails or saving my pictures while I’m on a trip. The Hackintosh is only an increase of comfortably and power but never will be my primary computer. Don’t expect having a careless-computer for a cheaper price than an Apple-machine.

For:
If it is fun for you building computers. If you can bring up some time in configuring the machine to make things work as expected. If you want to have a cheap Unix-workstation but still want to be able to use proven tools like MS Office, Adobe- & Apple-stuff instead of depending on alternatives for 100%. If you want to have the same power of a MacPro for much less.
And finally: If you know what you are doing.

I basically always checked all components on Geizhals which is an Austrian hardware/seller ranking page. Afterwards I’ve checked TonyMac if users had good experience with them when building their own hackintosh.

Mainboard: Intel Sockel 1550, Gigabyte GA-H97M-D3H
I’ve chosen a microATX-mainboard, to be 100% sure that I won’t have any troubles getting this thing into the B&W-case. Lots of tonymac-users were also using this board. Too bad that I didn’t make the onboard-graphics work with my Hackintosh. So I had to buy an additional graphics card.

Graphics: Asus GTX 760, 2GB
I really don’t play any games on my machine. So initially I thought of only using the mainboard’s onboard-graphics. Too bad that this did not work, so I invested more money to have a future-save 4K compatible-graphic card.

RAM: Crucial Ballistix Sport, 16GB
Wow. 16GBs of RAM. Most Linux-distributions would fit in there, multiple times! There are two free banks left on the mainboard so that I can extend the system to 32 GBs in the mid-future.

Storage: SAMSUNG 840 Evo Series 500GB SSD
In the last years, the biggest improvement in hardware I realized was switching to a MacBook Air and its build-in flash storage. Nowadays old-school spinning hard drives should be only used for backup or mass-storage of data. But not as working devices since prices really dropped a lot in the last couple of years.

Power: BE QUIET! Straight Power E9 580W
580Watt should be enough for my system. This power-supply is by far the most noiseless supply I’ve faced.

You can also check out my post on Tonymacx86.com about my build.

While doing my first Hackintosh research on the Internet, I came up with the idea to use an old Apple Blue & White PowerMac G3-Case from 1999. I’ve got mine on eBay for around €50.
70% of my time I spent on this case-mod. The other 30% for setting up the Hackintosh.

Basically the G3 B&W-case is ATX-compatible, but only for around 90%. I had to make some really terrible cuts into the case’s back to make the power supply and the mainboard fit. I also used an additional Plexiglas because the ATX mainboard’s screws wont fit to the case directly. A nice thing about this case is that you can open the door to the right to reach all the hardware. Also there is a nice bay for hard drives that you can disassemble easily. Apple also uses an own logic-board for the case’s front-button & 2-color led. Since I’m only using the power-button I bypassed the logic board and connected it to the mainboard directly.

The first thing I’m going to replace is Intel’s boxed fan. If the computer is idling around the fan really wont make so much noise. But as soon when you start ‘using’ the computer it reminds me of a bee. Another thing but not so important is to upgrade to a 4K-monitor, but currently my 20″-monitor does his job very well.